Rabbi Yaakov Rozenberg has been learning regularly by phone with Chaim Oren from Moshav Olesh. Chaim is the kind of fellow that really wants to learn and understand and he takes everything he learns very seriously. Before Chanukah Rav Yaakov sent Chaim the blessing over the Chanukah candles together with his own blessing that it would bring light to his home and to his life.

Reb Yaakov told him not to mail them, he would come himself and pick them up. When Reb Yaakov arrived, Chaim was already waiting outside for him. He beckoned them to join him in the kitchen and there on the table was the Megillah and the books. He apologized for hosting them in the kitchen explaining that the Plasma screen in the main room didn’t seem appropriate for such honored guests.

It turned out he had a Megillat Esther and some holy books which he’d inherited from his father. “I want these things to be used by Jews like you who will appreciate them use them and continue the Jewish chain’.

And so his personal story came out. He was born in Romania and came to Israel at the age of four after horrific experiences in the camps with his parents. He has no memories of that time other than waking in the night to the terrifying sounds of his mother and sister screaming in their tiny hiding place.

His aunt had somehow smuggled a Sefer Torah into the camps and guarded it with her life,  bringing it to Israel with her where she had donated it to a shul in Kvar Saba. Years later when she attempted to trace it, she had no luck in finding it.

It turned out that Chaim’s father was an observant Jew who finished learning the entire Shas a number of times while his mother was not. His father used a Shas that has been in his family now for 150 years and Chaim still has it. He hopes that one day his sons will inherit it and appreciate it.

As he turned 15 his father insisted that he attend a yeshiva but he only stayed there a short while feeling it was not for him. Yeshivat Beit Yosef Yitzhak was then situated next to the border. He left and joined the army where he lost all vestiges of his religious upbringing, working as a plane technician as a full time soldier where he remained until the age of 40. At 40 he retired from army service and took up farming which he did for the rest of his life until his official retirement. After that, he began to strengthen his ties to Judaism once again, one day shocking his wife with the statement that from now on he would no longer travel on Shabbat. To this day, she is still not prepared to accept this reality. What’s more, he took upon himself to lay tefillin each day.

When, one day, he had a phone call from Reb Yaakov offering to learn with him by phone once a week, his joy had no bounds. With tears pouring down his face, Chaim pointed upwards saying ‘one must preserve the Jewish people in their original form to be Jews just like you’.

Before they knew it, they were all drawn into a phylisophical discussion. Chaim told them that he had been ‘poisoned’ by foreign philosophy and was not prepared to share those ideas. He was determined that he learn from them and not them from him.

He made a point of giving his guests the utmost honor, thirsty for their words of wisdom. It was obvious that this visit meant the world to him. As the evening drew to a close they were forced to begin to say their farewells they were all filled with the feeling that ‘Netzach Yisrael lo yeshaker’. It was a joint feeling that a Jew is never lost to his people.

Chaim lovingly wrapped up two Megilla scrolls, offering both to Chaim to take home and chose whichever one he preferred, together with the books, with the promise that they would all get good use. Before they left, he also gave them ‘crembo’ treat for the children.

Their farewell was an admixture of hugs and warmth in typical Eastern fashion after taking photographs.

Chaim doesn’t only talk and reminisce. He is a man of action. At 1 in the morning, as they took their leave, their car alarm began to emit a loud siren that threatened to wake up the entire moshav. Chaim ran into the house to bring tools and fix the problem. “He would not let us travel home until he was sure we could drive safely”. So many qualities in one person, a real good-hearted Jew. 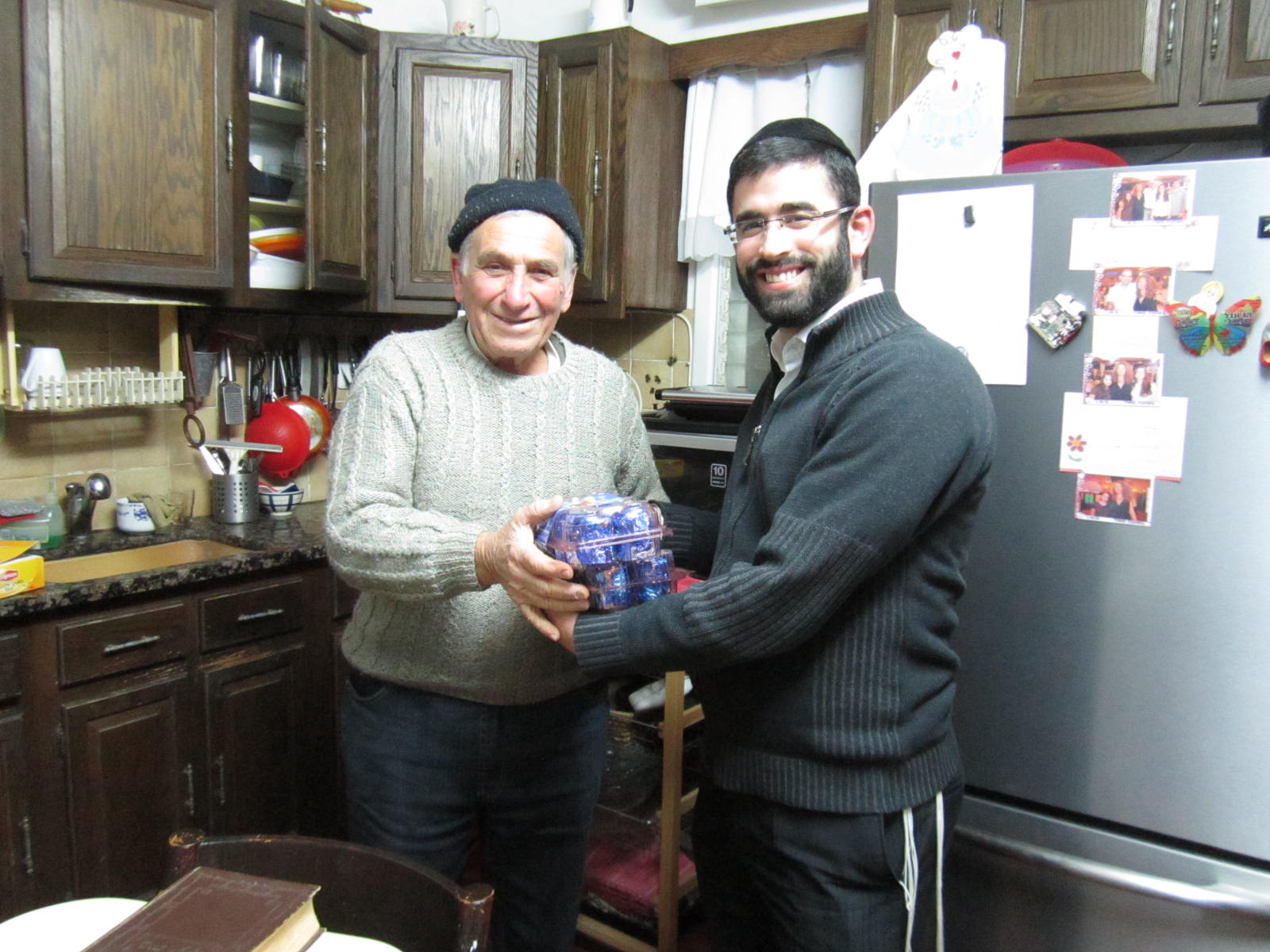 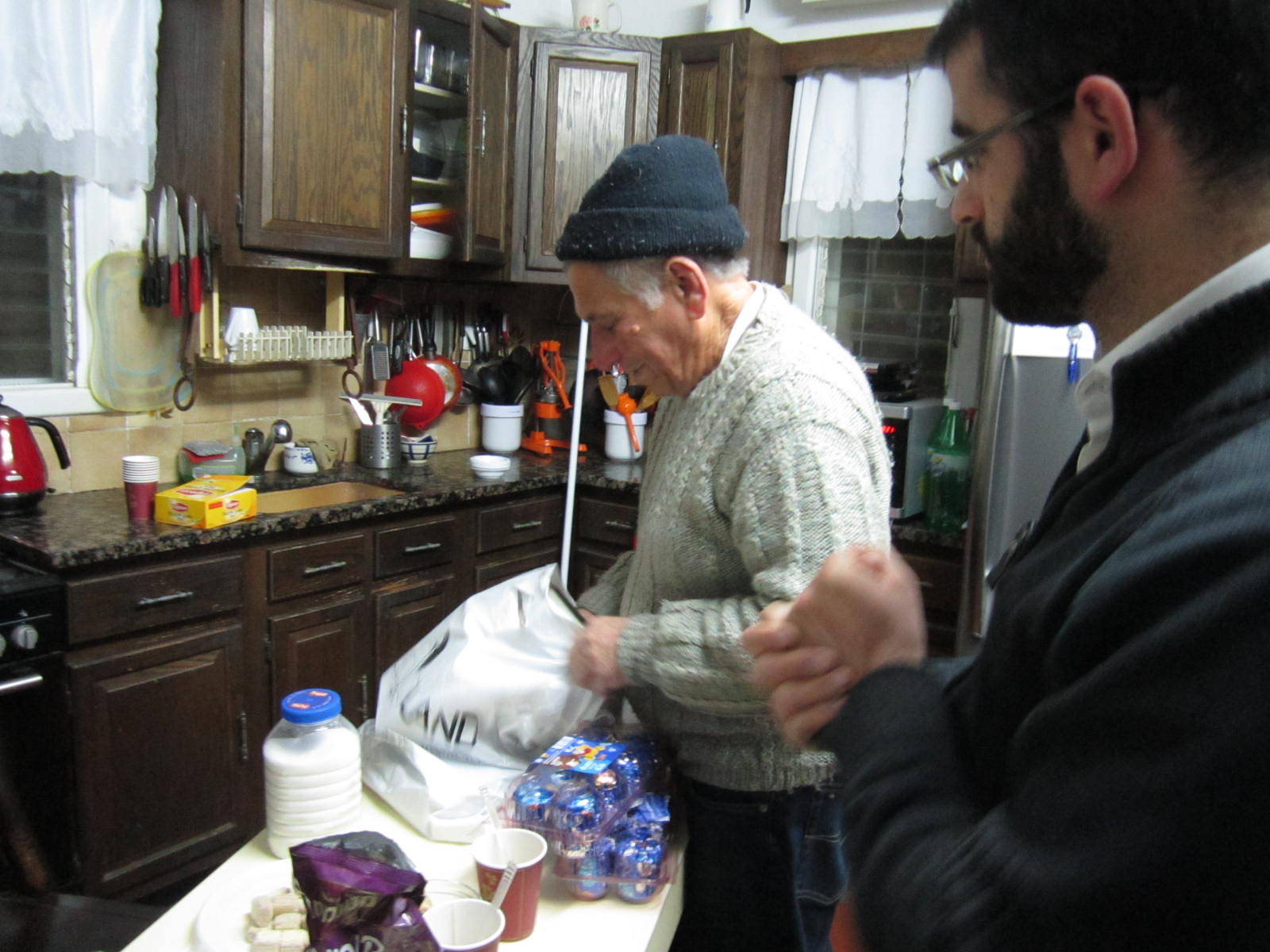 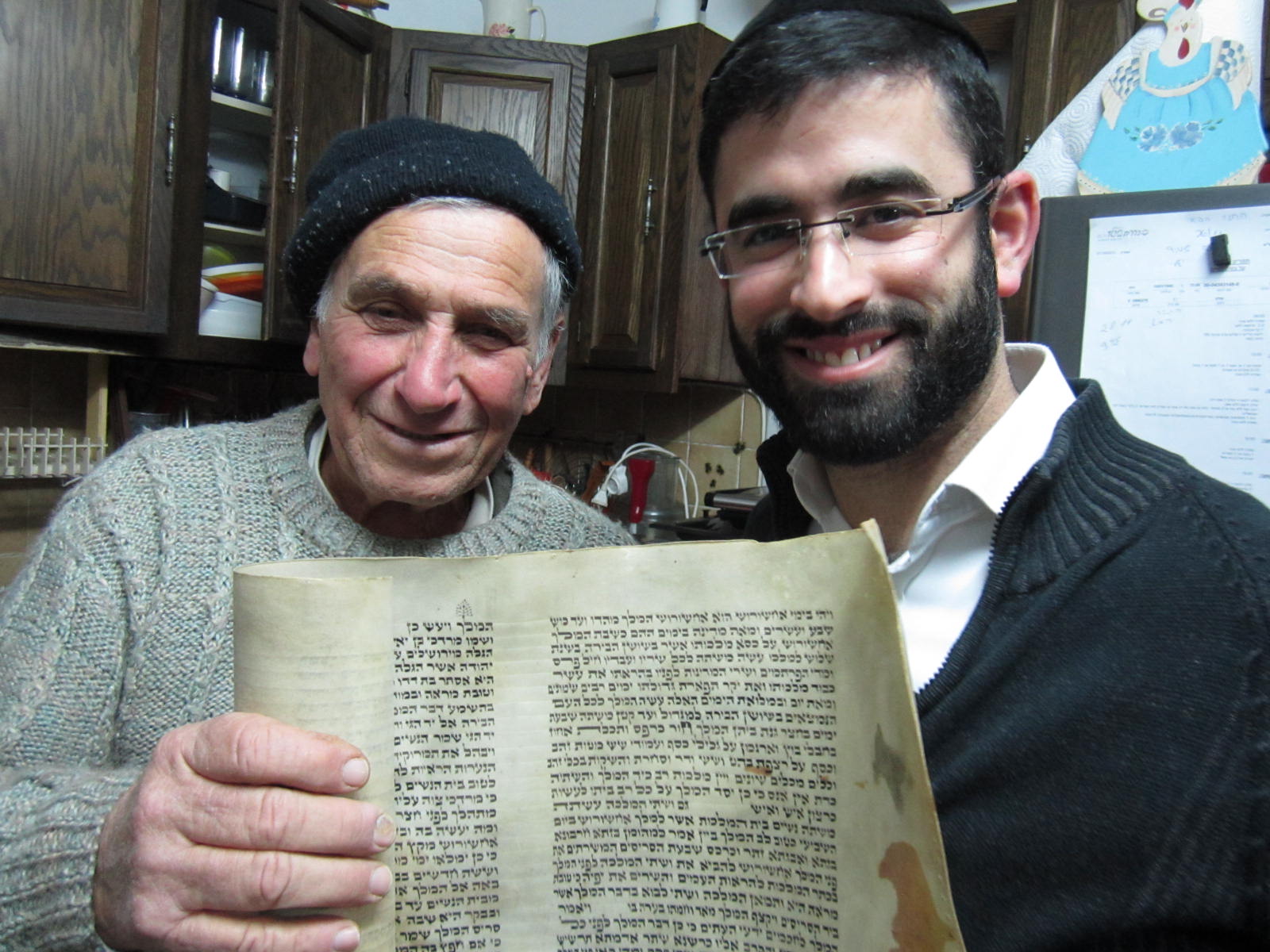